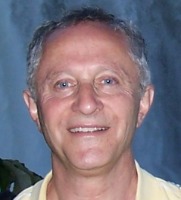 Avi Lehrer paints mainly in oil on canvas. His themes range from landscapes to still life, nudes and portraits. He focuses on color and composition.

Whilst Belgium was occupied by the Nazis in 1940, Avi’s parents managed to escape and eventually got to England. In common with other survivors, his parents were intent on building up a family that would cherish their Jewish heritage and appreciate the Jewish homeland. Avi was born in London in 1947.

Avi’s art education started at an early age in his school in London. Among the presents he received for his Barmitzvah were books on Impressionism and early Dutch artists. That kindled his interest in art and drawing. His art however went into extended hiatus until he emigrated to Israel in 1997. Avi has a Bachelors and a Masters degree in Law from London University. He practiced as a lawyer in London for 25 years and is also a member of the Israel Bar.

Whilst a student, he was involved in radical student politics. He went to Israel in 1967 as a volunteer but returned to England to complete his studies. He was active in Soviet Jewry campaigns and first went to Russia, Kazakhstan and Uzbekistan in 1970, specifically on a Jewish mission.

In Jerusalem he studied art with, among others, Eldar Farber and Ben Tritt, both of whom taught at The Jerusalem Studio School, a prestigious art college under the direction of Israel Hershberg.

In addition to art, Avi has volunteered for a group that looks after people suffering from Alzheimers, founded the British Israel Group and co-directed and co-produced a documentary film on the state of the Yiddish language in Israel. The film has been shown at Jewish Film festivals around the world as well as on television in America and Europe.
Previous